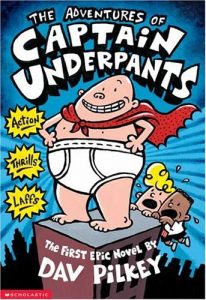 They are many different types of children. This is especially evident, in a large number of them in a school environment. There are your athletic kids, bookworms, popular kids and of course your troublemakers. For every group of troublemakers as we can always expect, are the teachers who are tired of their shenanigans. Take a walk through the lives of two very mischievous 4th grade pranksters. As their pranks not only land them into trouble but also into the creation of their own superhero.

Meet 4th graders, George and Harold, of the Jerome Horwitz Elementary School. They are two prank-loving tykes. Their other hobbies include; hanging out in their tree house and other 4th grader activities. Additionally, the two also make their own superhero comic book. The comic is based on a hero who saves the day, wearing nothing but his underpants. They also happen to sell this comic to their classmates for a price they can afford. Young businessmen in the making I would say.

Their classmates are huge fans of the bald, stout, cape and underpants wearing hero that is Captain Underpants. However, the principal of the school Principal Benjamin Krupp is less than a fan of his pupil’s favorite fictional hero. Principal Krupp has also grown quite tired of the mischievous behavior of George and Harold. Nothing would please Mr. Krupp more than to see their silly antics come to an end. This leads his character to take on the role of a villain who is always on the lookout for the chance to ruin our heroes’ fun.

As the books progresses, George and Harold carry out a large-scale prank before the start of the school’s football game. The prank causes so much confusion which results in the school being forced to forfeit the game. Our pranking duo, are feeling quite smart with themselves. As they think they have been clever to pull off the prank without being caught. Their smiles are quickly dashed the next day as Principal Krupp calls them into his office to declare he has caught them on video carrying out the massive prank. Having cornered the boys, he delights in this chance to get at the pranksters and forces them to make a tough choice. George and Harold must decide between doing whatever chores principal Krupp chores comes up with. Such as; washing his car, mowing his lawn and any other task which comes to his mind. The other choice being that Principal Krupp releases the video of them pranking the football team to all those who were pranked. Then letting the team going about punishing our young pranksters in their own way.

George and Harold choose to do chores asked of by Principal Krupp and follow all the demands he makes thereafter. Our young pranksters stumble across a 3-D hypnosis ring within a magazine. They believe this ring to be the answer to their all their problems and cook up a plan to use it. After the ordered ring arrives, the duo uses the ring to hypnotize Principal Krupp. While is in the hypnotized state, the duo goes about retrieving the pranking video from his desk drawer. They then replace the video in the drawer with another. Then they make Krupp do silly things in his hypnotized state. Realizing how much power they now have. The young pair decides to make Mr. Krupp believe he is Captain Underpants.

As the story continues, Captain Underpants encounters the evil Dr. Diaper who is intent on causing mass destruction to the world’s cities. Through acts of mighty heroics, Captain Underpants manages to subdue to evil Dr. Diaper and save the day. Following this, George and Harold decide to break the trance on Principal Krupp. Mr. Krupp doesn’t remember any of his heroic feats and the youngster’s lives return to normal. Or so they thought. During class on a later date, our young duo watch in confusion as they witness the reemergence of Captain Underpants. Completely dumbfounded, the young boys sit unaware of the dramatic set of heroic adventures which await them.

All soft copy books of Captain Underpants Book Book PDF acquired through Reading Sanctuary require you to leave a review on the book’s Amazon page to help authors. Thank you!