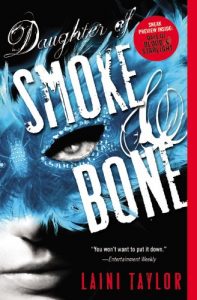 Daughter of Smoke and Bone Summary

The first book in the Daughter of Smoke and Bone trilogy, the novel Daughter of Smoke and Bone by Laini Taylor is a fantasy rich novel that details the life of Karou, a 17-year-old girl living in Prague studying art. Karou initially is strange; she has blue hair and tattoos covering her body, she had these tattoos as long as her memory serves her. But quickly, you find out more about Karou and her interactions with the trans-dimensional plane which will leave you desperately wanting to know more. Karou attends art school in Prague and simultaneously tries to avoid her ex-boyfriend, Kazimir. As we get to know Karou more, we find out that she is in fact very strange, as four chimeras raised her on a trans-dimensional plane between the human world and Eretz, the land of the chimera.

Her father figure, Brimstone, is not human at all, but rather something referred to as a Wishmonger. He employs Karou to travel the world in search of teeth; both animal and human alike. He doesn’t mention what they are for, and in exchange, Karou is paid with trinkets that she can use to grant wishes. But while returning to Brimstone’s workshop one time, she finds a black handprint scorched on the portal door. Eventually, they start appearing more frequently, both confusing and worrying Karou.

They appear to have been left by angels passing into Eretz. One of these angels, Akiva, has been spying on Karou. And while she’s buying some teeth from a grave robber in Marrakech, an angel named Izil makes himself visible to Karou. She learns that he wants the other angel, Akiva, to take him back to their world. Izil informs Akiva of Karou’s presence and Akiva attacks her.

She escapes the battle by fleeing into one of the portals leaving to Brimstone’s workshop. While there, Brimstone appears to be absent, so she peers outside of his workshop into the world of Eretz. Upon returning, Brimstone discovers her and is angered by her curiosity. He sends her back to Prague as punishment and seals the portal doors.

In desperation, Karou travels the world seeking teeth dealers to rob for their trinkets to gain wishes and return to Eretz and her family. She uses one of her wishes to obtain the ability to fly, and shortly after, returns to Marrakech to make a deal with Razgut. The two end up striking a bargain that will allow her back into Eretz.

During a final visit to Prague, Karou is attacked by Akiva once more. She defeats the angel and brings him to her apartment for questioning. While there, Akiva explains to her the details of the seraphim-chimera war, and eventually, he notices her wishbone necklace. This causes him to cry out, realizing who she is.

The novel Daughter of Smoke and Bone is an excellent combination or urban and traditional fantasy. The author spares no expense when delving into descriptions of these supernatural beings or worlds. Additionally, her introduction of the love interest between Akiva and Karou is surprisingly complex and integral to the story. While most Young Adult novels add in the love story as a perceived necessity, Laini Taylor uses this interaction to build the foundation of the story and leans on it heavily to inspire a craving to read further into the series.

The download link to Daughter of Smoke and Bone [PDF] is available for your Kindle and other e-readers for purchase from Amazon using the link below.

All soft copy books of Daughter of Smoke and Bone Book PDF acquired through Reading Sanctuary require you to leave a review on the book’s Amazon page to help authors. Thank you!

Buy or Download PDF of Daughter of Smoke and Bone Novel