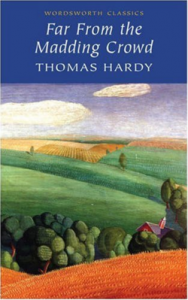 Far From the Madding Crowd by Thomas Hardy tells the story of a woman named Bathsheba Everdene, who has recently come into ownership of a large estate and is pursued by three suitors. Each of the three suitors possesses different qualities; Gabriel Oak the Shepherd, William Boldwood the bachelor, and Sergeant Francis Troy. The novel has been adapted into two films, two of them titled Far From the Madding Crowd, with the first released in 1967 and another in 2015 directed by Thomas Vinterberg.

We meet Bathsheba Everdene when she is staying with her aunt, Mrs. Hurst. Here she meets Gabriel Oak, a young shepherd who falls in love with the younger Bathsheba. The two grow well acquainted and at one point, Bathsheba even saves his life. Unfortunately, Gabriel misreads the situation and proposes to Bathsheba, prompting her to refuse. Embarrassed and annoyed by Gabriel’s pursuit, Bathsheba decides she must leave her aunt’s farm and move to Weatherbury.

After a tragic accident when Gabriel’s flock is driven off a cliff, he finds himself in financial ruin. He sells everything he owns, and manages to escape debt, but is left penniless. At a hiring fair in Casterbridge, he searches for a new job but finds none. Desperate, he carries on to Shottsford, a town close to Weatherbury, but along the way, he encounters a fire on a farm. After leading the rescue to save the farm from the fire, the owner comes to thank him. It turns out to be Bathsheba, and she has recently acquired the farm and has become wealthy. He makes it apparent to her that he is seeking employment, so she decides to hire him.

Bathsheba also develops another suitor, William Boldwood. He is a prosperous farmer who piques Bathsheba’s curiosity. Playfully, she sends him a letter with the words marry me. She initially intended for this to simply get his attention, but he takes the letter seriously and proposes. She seriously considers the proposal due to his reputation as an eligible bachelor but postpones answering him as she does not love him.

At the same time, Sergeant Francis Troy finds himself in Weatherbury where he happens upon Bathsheba one night. Initially, she isn’t fond of him but soon finds herself infatuated with him after he performs a display of swordsmanship. Upon seeing this, Boldwood becomes enraged so Bathsheba decides she must leave once more to prevent Troy from returning to Weatherbury. When they do return, Boldwood attempts to liable Troy to leave Bathsheba alone, and Troy playfully considers the option, before turning him down informing him that they have already married. Angered again, Boldwood finds himself humiliated and vows to see revenge.

Bathsheba also discovers that Troy may not be the husband she initially thought as he is more interested in gambling than farming. In addition to this, before meeting Bathsheba, Troy had promised a young maid named Fanny Robin that the two would marry. Unfortunately for him, the young girl accidentally went to the wrong church, leaving Troy at the altar embarrassed. Angrily, Troy departed, not knowing that Fanny Robin was pregnant with his child. Upon finding all of this out, Bathsheba starts to realize that Troy may have never loved her at all.

The story twists and turns with love, embarrassment from rejection, vows of revenge and a troubled heart. You learn that some characters are not quite what they seem, and some are far more than you ever expected. This book is elegantly written with vivid descriptions of both characters and scenery. By the end of the novel, you’ll realize that the title is not misspelled, but rather an intentional form of phrasing means to convey their emotion of love.

Download is available for Far from the Madding Crowd [PDF], Epub versions

All soft copy books of Far from the Madding Crowd Book PDF acquired through Reading Sanctuary require you to leave a review on the book’s Amazon page to help authors. Thank you!

Buy or Download PDF of Far from the Madding Crowd Novel 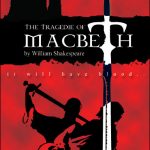