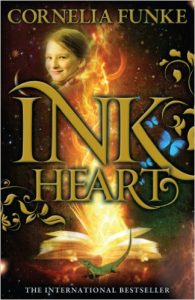 Inkheart by Cornelia Funke is the first series in the Inkheart Trilogy. It is a story about a young girl, Meggie, and her father, Mortimer (or Mo for short). Her father is a bookbinder, and he can bring characters to life from stories just by reading aloud. The novel was also adapted into a film in 2008, directed by Iain Softley.

The story begins when Meggie spots a stranger standing in the dark outside their house. Her father invites the stranger in, and he introduces himself as Dustfinger. The two of them go into his workshop, leaving Meggie outside. She eavesdrops on them and hears them discussing weird places and peoples names, specifically a man named Capricorn.

The next morning, Mo informs Meggie that the two of them have to go Meggie’s Aunt Elinor’s house so he can fix some books. They take off, on the road, they soon come upon Dustfinger, who joins them on their trip. Upon arrival, Elinor seems displeased but lets them in.

After a short while, Mo is captured by people with strange names and they also bring a book, Inkheart. The book Capricorn is searching to find. During the time Mo is caught, Dustfinger wanders off and eventually returns, with a plan to bring the two of them to Capricorns village to rescue him. Arriving at the camp, Dustfinger is spotted by a man named Basta who captures Elinor and Meggie and imprisons them, leaving Dustfinger to escape.

Here, we find out that Elinor had secretly switched the Inkheart book, and she holds the copy that Capricorn is searching. Eventually, Capricorn has them thrown in with Mo, where Meggie demands the full story from her father. It turns out that when Meggie was a child, her father was reading Inkheart to her mother. This is when he read out three names, Basta, Capricorn, and Dustfinger. There was a short fight in the house, but Dustfinger and Mo finally managed to expel the two. Unfortunately, it turns out that when something is read out of a book, and exchange must be made. And as a result, Meggie’s mother had disappeared into Inkheart.

Capricorn has captured Mo, whom he refers to as Silvertongue so that he can read out treasures and wealth from books. During one of the readings, a boy named Farid appears. Farid joins the prisoners in the cells, until that night when Dustfinger returns to save them. They escape to Elinor’s car all the while chased by Basta and another guard named Flatnose. Shortly after escaping, their car breaks down, forcing them to walk. Unfortunately, the guards are close behind them, forcing them to hide to evade the guards.

This novel is pretty much a dream come true. Being able to read characters out of a novel is every bookworms dream, and as such, it is quite an ensnaring story. The characters, while Meggie is quite young, are very likeable and clever. The plot is unique and will have you yearning for more and more with each page you turn. The novel accurately conveys the emotions you experience when reading, joys, terrors and all.

Download Inkheart by Cornelia Funke Book Book PDF [PDF] [ePub] or you can purchase the book from Amazon.

All soft copy books of Inkheart by Cornelia Funke Book Book PDF acquired through Reading Sanctuary require you to leave a review on the book’s Amazon page to help authors. Thank you!