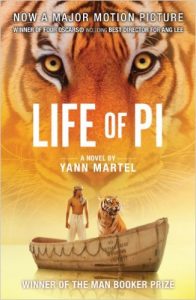 The Life of Pi is an adventurous novel that takes an alternative look at faith, not specifically religion. It’s the story of a boy named Pi Patel whose family decides to move from Pondicherry to Canada. They travel by boat, and during their journey, the boat ends up sinking, and Pi becomes stranded on a raft in the sea with an orangutan, a zebra, a hyena and a tiger. The novel is also adapted into a film released in 2012 directed by Ang Lee.

The story begins with a man named Francis Adirubasamy recounting a story of the childhood of Pi and the troubles he encounters. He shortens his name from Piscine to Pi to avoid the other kids making fun of him. His family owned a Zoo in Pondicherry, and Pi found comfort in the company of the animals. Motivated by the political strife in Pondicherry, Pi’s parents decide to make the move to Canada on a cargo ship full of zoo animals.

The cargo ship is caught in a storm on their travels, and it begins to sink. Pi finds a lifeboat in the ocean and climbs aboard, but noticing a drowning tiger and makes his way over to him. Pi quickly realizes his mistake in bringing a wild animal aboard and jumps into the ocean to avoid being eaten. In addition to the tiger in the lifeboat, there is also an orangutan, hyena, and zebra. After the storm subdues, the hyena kills both the orangutan and the zebra, eating them. As Pi peaks over the side, the tiger, whom he names Richard Parker, attacks and kills the hyena.

Pi ends up remaining at the front of the boat, out of the reach of the tiger. He survives on canned water, emergency rations, and fish that he catches. He also finds and feeds the tiger, and begins trying to train him. Along their journey, they encounter an island in the middle of the ocean that appears to be made up entirely of vegetation. They stay on the island for quite some time, until one day, Pi discovers human teeth in a tree’s fruit. He comes to the conclusion that island eats people, and he and Richard Parker continue their journey.

After a while longer on the ocean, the two of them finally wash up on a beach. It turns out that he and Richard Parker had spent 227 days in the lifeboat, and had been presumed dead for quite some time. The beach he washed up on was in Mexico, and after landing, Richard Parker runs away and leaves Pi alone on the beach. The authorities soon find him, and the Japanese owners of the cargo ship that he was originally on arrive to interview him. He tells them the story with the animals, but they refuse to believe him. He then replaces the animals in the story with instead the orangutan being his mother, the hyena is a cook from the ship, the zebra being a sailor. The Japanese men prefer this version of the story, as this is what they choose to write in their report.

The most interesting aspect of this novel is the symbolism of the animals and their human counterparts. You only find out at the end of the book about this alternative story, but once you understand that the animals are meant to represent people, the actions and events begin to make more sense. Strangely enough, the tiger is never allocated to a person, so it’s up to you to decide whether the Tiger is a mysterious stranger or Pi himself.

The download is available via purchase from Amazon for The Life of Pi by Yann Martel. [PDF], Epub and Audiobooks versions of this creation are available from Amazon.

All soft copy books of The Life of Pi by Yann Martel Book PDF acquired through Reading Sanctuary require you to leave a review on the book’s Amazon page to help authors. Thank you!

The Life of Pi: A Novel