Loading....
Download PDF
Advertisements
★ ★ ★ ★ ★
3.56 / 5 (9 votes)
All text copies of Little Women PDF acquired through Reading Sanctuary require you to leave a review on the book’s Amazon page to help authors (which can be found below). This also applies to each Little Women Book Download Thank you! 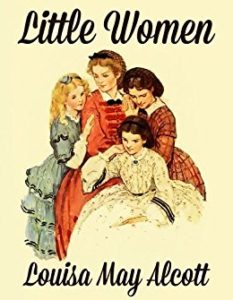 Even though Little Women is in the fiction category, it is well-known that the book draws influence from Louisa’s own early life experiences. The highly successful novel has been adapted multiple times since it’s 1879 release in the on multiple platforms. 1933, 1949, 1978, 1994 mark the first four adaptation release dates. Then the BBC adapted the book into a TV series in 1950, 1958, 1970, 2017 (but aired in 2018). The current latest movie was released on the 28th of Septemeber in 2018 (trailer below).

We are introduced to the March sisters Meg, Jo, Beth, and Amy. All four girls have vastly different personalities:

Jo – is considered a tomboy with anger issues – she is very impulsive but is ironically also a writer. She also often assists her rich widowed great-aunt March.

Meg – teaches a local family of four – she is beautiful and is considered to be traditional.

Amy – is the youngest and is still in school.

Beth – is very shy and prefers the confines of her home as opposed to the environment of school – she also plays the piano and was given one by their neighbor Mr. Laurence.

Unfortunately, our dear Beth contracts scarlet fever after spending some time with a poor family. This forces Jo to tend to her sister’s illness. Amy is sent instead of Jo to Aunt March while Beth was still ill and possibly infectious. She soon recovers but not to 100%.

Jo is finding her grove with her literature while Meg stays with friends for a few weeks. Her friends invite the neighbor’s grandson, Laurie to one of their parties thinking that Meg was in love with him. But they were mistaken and Meg is actually interested in John Brooke, Laurie’s tutor. We follow this love life until marriage later on in the novel.

Meanwhile, Laurie returns from college and soon realized that because of Jo’s interest in him excelling at his studies, he has fallen in love with her. Jo senses Laurie’s feelings and he soon proposes to her but she rejects him because the love she feels for him resembles that as you would for a sibling.

Jo then takes a break from everything for six months and travels to a friend of her mom living in New York. While there she takes German lessons with Professor Bhaer. Unfortunately while away Beth’s health has deteriorated and Jo returns to take care of her.

Meanwhile, Amy is on a European tour where she runs into Laurie. In the wake of the news of Beth’s death the two console in each other emotionally and romantically. They are soon both married in Europe.

Professor Bhaer stays at the Marches for two weeks and on his last day, he proposes to Laurie. Aunty March died and left her mansion to Jo which she turns into a boys school. Jo and Bhaer then have two boys of their own. Amy and Laurie have a daughter and Meg and John already had twins. We then end with Marmee (the girl’s mother) celebrating her 60th at the mansion with her three surviving children.

“Watch and pray, dear, never get tired of trying, and never think it is impossible to conquer your fault.”
― Louisa May Alcott, Little Women

Download The Little Women from below or purchase a copy from Amazon.

All soft copy books of Little Women acquired through Reading Sanctuary require you to leave a review on the book’s Amazon page to help authors. Thank you!

If I Stay
Advertisements