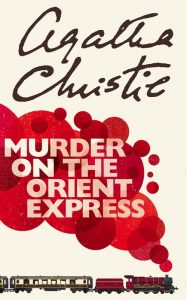 A private detective is unexpectedly summoned, to return to his home country from a foreign land. With the help of an old friend, the detective then boards a train to London. Aboard this train, he is confronted with a passenger who believes someone intends to murder him. As luck would have it the passenger is murdered in what would appear to be a perfect crime. Following the classical scheme of the murder-mystery genre, the detective attempts to solve the case. What sets the “Murder on the Orient Express” apart from the other books within its genre, is this tale’s twist of the murderer becoming the victim.

The mystery begins as Hercule Poirot, a private detective but former police officer boards a train to Stamboul. Upon his arrival to Stamboul, he checks into a hotel and prepares to make himself comfortable. However, before he can do this, Hercule receives a telegram commanding him to return to London.

While waiting for the next train, Hercule encounters one of his old friends M.Bouc. M.Bouc arranges for the detective to have a seat, on the Orient Express when it arrives. As they wait for the train, Hercule informs M.Bouc about a pair of men he saw in the hotel’s dining room; Ratchett and Hector MacQueen. Hercule informs M.Bouc that Ratchett is actually a vile character based on his observations. The Orient Express eventually arrives and the two board.

Once aboard Hercule is forced to take a spot in second class due to the train being unexpectedly full. While M.Bouc luckily received the final spot in first class. Ratchett and Hector are also passengers on the train. Hector becomes aware of this when, Ratchett informs Hercule, that he has received some worrisome messages recently. As a result, he has come to believe that someone is trying to murder him. Ratchett asks the detective to look into the matter, which he refuses.

M.Bouc makes arrangements to move to another coach so that Hercule can take his spot in first class. Early the following morning the detective’s sleep is broken, by a loud cry from Ratchett’s nearby compartment. The train quickly returns to silence after Ratchett’s compartment was investigated. It becomes everyone’s estimation that the cry was not out of distress. Hercule has trouble falling asleep due to the particular silence of the train. He later calls his room bell to call a conductor to request some water. The conductor also informs Hercule that the train is currently stuck in a snowbank.

The subsequent morning, the detective is notified by M.Bouc that Ratchett has been murdered. He also believes that the murderer is still aboard the train. Examining the situation, Hercule decides to take the case. Hercule makes his way to Ratchett’s compartment to examine his body. There he discovers that the victim’s body has twelve stab wounds on it. While surveying the room, Hercule also notices that the window has been left open. He deduces that this was done in an attempt convince those investigating, that the killer used the window to escape. However, this is quickly debunked, as there are no footprints left, in the snow under the window. Further observation reveals; a handkerchief with the initial “H” embedded within it, a match different from to the other matches on Ratchett’s person, a pipe cleaner and a piece of burned paper with the word Armstrong scribed upon it.

The paper marked with the word Armstrong helps Hercule to deduce what he believes to be Ratchett’s true identity. A couple years in the past a crooked man by the name of Cassetti kidnapped a three-year-old Daisy Armstrong. Cassetti had in fact collected ransom money from the Armstrong family. Despite receiving the money, Cassetti murdered the child anyway. Hercule following his theory, suspects the murderer to be an Armstrong who sought vengeance.

Hercule begins interviewing all the passengers on the train in search of more information. Every passenger seems to have a reasonable alibi. The detective eventually resorts to doing a luggage check on all the passengers, which reveals some very valuable clues. With the help of Dr.Constantine and M.Bouc, Hercule reexamines all the facts and develops a list of inquiries. Utilizing the clues and list of inquiries, Hercule spends a fair amount of time lamenting the case in silence. Hercule emerges from his meditative state with what he believes to be the solution to the case. From his deductions, none of the passengers are who they say they are. This brings about a twist in the tale that none of Hercule’s colleagues had foreseen.

Leave us a comment or like if you enjoyed this brief summary.
Download the Murder on the Orient Express [PDF] from below or purchase a copy from Amazon.

All soft copy books of Murder on the Orient Express Book PDF acquired through Reading Sanctuary require you to leave a review on the book’s Amazon page to help authors. Thank you!

Buy or Download PDF of Murder on the Orient Express Novel

The Shape of Water Book
Advertisements