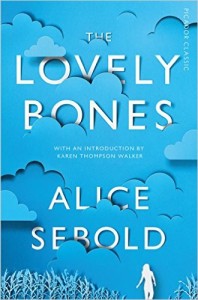 The Lovely Bones by Alice Sebold is a dark novel about the murder of a young girl named Susie Salmon. After her murder, the story is told as she watches the lives of her family and friends, and also of her killer. The novel was adapted into a film in 2009, directed by Peter Jackson.

The novel begins with Susie Salmon introducing herself. She’s an average 14-year-old girl who has just received her first kiss and is looking forward to high school the following year. One night, on her walk home from school, she is met by one of her neighbors, George Harvey. He invites her to come to see something he has built, and because her parents have met George, she trusts him and goes to see what he has made.

George had made a “playhouse” for the neighborhood kids that he built underground. While in there, Susie begins to feel nervous and attempts to leave, but George holds her back. She is then sexually assaulted and murdered. Upon her death, she is quickly brought to heaven where she is greeted by her guide, Franny. Franny explains that her heaven can be whatever she wants, and to Susie, heaven is her hometown high school. But in heaven, the one thing Susie wants most is the one thing she cannot have, to be back home with her family. Instead, she watches her family from above as they struggle to cope and reason with her disappearance and death.

Her mother just wants to escape the memory of her daughter, while her father attempts to confront it head-on. He believes that the police aren’t doing a good enough job of searching for his daughter’s murderer. He begins his own investigation, and soon enough he begins to suspect George Harvey of Susie’s murder.

While in heaven, Susie follows the life of her sister Lindsey often, witnessing her accomplishments and her coming of age. Susie struggles to understand the hardships that her sister encounters as she never had the chance to grow up. Lindsey ends up learning that her father suspects George as the murderer, and she too begins to obsess over catching him. She begins spying on him, memorizing his schedule, waiting for her opportunity to find a clue in regards to her sister’s death.

Susie’s death does not only impact the life of her family. Her first kiss, Ray Singh, and a girl from her school, Ruth Connors, are also affected. Ruth was the last person Susie’s spirit touched on earth, so Ruth too has become obsessed with Susie’s death. Ruth and Ray become close, forever linked in the grief of Susie’s death.

Susie also watches her killer, George Harvey. As she watches him, she learns more about him and in turn, meets some of the women from his past murders who are also in heaven. Susie wants to help apprehend George, but all she can do is watch from heaven as the police, her father, and her sister search for the neighbour just down the road.

The novel is rather dark, and pieces together the lives of the characters with little pieces of insight or thought which makes for suspenseful reading. It’s rather intriguing, as the novel is written from Susie’s perspective which leaves you understanding only what she witnesses. Regardless, with her perspective in heaven, you are often graced with little bits of information that the characters she is observing are unaware of. This will leave you sometimes yearning for them to make the discovery that they are so close to uncovering.

The download is available via purchase from Amazon for The Lovely Bones by Alice Sebold. [PDF], Epub and Audiobooks versions of this creation are available from Amazon.

All soft copy books of The Lovely Bones Alice Sebold Book PDF acquired through Reading Sanctuary require you to leave a review on the book’s Amazon page to help authors. Thank you!

The Lovely Bones: A Novel