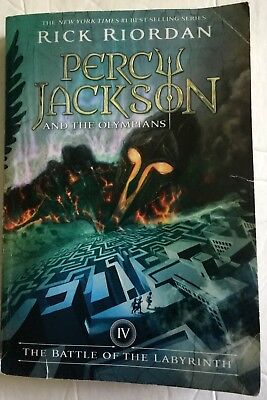 The Battle Of The Labyrinth Quotes

“Don’t feel bad, I’m usually about to die.”
― Rick Riordan, The Battle of the Labyrinth

“But remember, boy, that a kind act can sometimes be as powerful as a sword.”
― Rick Riordan, The Battle of the Labyrinth

“Red cattle,” Annabeth said. “The cattle of the sun.”
“What?” I [Percy] asked.
“They’re sacred to Apollo.”
“Holy cows?”
― Rick Riordan, The Battle of the Labyrinth

“Are you guys busy?” Juniper asked.
“Well,” I said, “we’re in the middle of this game against a bunch of monsters and we’re trying not to die.”
“We’re not busy,” Annabeth said.”
― Rick Riordan, The Battle of the Labyrinth

The Battle Of The Labyrinth Plot

The Battle of The Labyrinth is the fourth book in the Percy Jackson saga, and the darkest one yet. The story involves the discovery of the maze from the Greek myth of the Minotaur. Created by Daedalus, thousands of years ago, the maze evolved during all those years extending itself to the underground of many locations throughout the world.

The discovery of an entrance to the maze in Camp Half-Blood brings deadly implications, as the heroes believe Luke Castellan plans to invade the center of the camp through the labyrinth. With their forces lowered after many demigods joined the villain, they know they can’t handle this battle. Their only hope is to discover how to navigate the maze to stop the attack.

As a daughter of Athena, Annabeth is the natural choice to lead the quest into the labyrinth. This results in an exploration of the character’s fears and insecurities throughout the narrative coupled with important character development. Her journey showcases her innermost qualities while preparing her for the larger role she will have to play in the final book.

Our beloved main characters Percy, Annabeth, Grover, and Tyson are the center of the narrative, but there is much space for the involvement of characters who didn’t get a lot of moments in the previous installments. First, there is Nico. He is really angry after the events of the previous book. His actions seem suspicious and his intentions aren’t clear.

Nico gets his chance to shine through the development of his powers and his emotions, an important point for the narrative. On the other hand, there’s Rachel, the mortal girl who appeared briefly in The Titan’s curse. She now has a larger role and her involvement brings some tension to the group. Grover’s quest for Pan also is part of the narrative and brings an impact capable to make a great difference in the group’s quest.

The labyrinth is terrifying and that, along with Daedalus’ story, is responsible for the darker tone of the book. The maze is somber, full of monsters and mystery. It confuses its inhabitants with shifting walls and presents many difficult choices capable of making anyone go mad. Choices are an important theme of the narrative as each character is faced with different options.

From Percy’s dreams, we discover more about Daedalus and his terrifying attitudes. He is the biggest mystery in the book and each time we read a part of his story we want to know more. This narrative adds to the darker tone of the book. While The Battle of The Labyrinth still has the humor and the action sequences of the previous books, it focuses more on the characters’ emotional struggles. This brings a nice change to the pace and the story.

With the theme of choice, we see each character show their true colors, and such a moment is a part of Percy’s development. In the middle of the book, he has a difficult choice to make and the result showcases what is important for the character. His relationship with Annabeth is more developed, culminating in their most romantic moment yet.

As the final moments of the story arrive, things get tenser and tenser. We are presented with a showdown that provides a satisfying conclusion while establishing the seeds for the final book. Overall, The Battle of The Labyrinth has the best qualities of the previous books with richer character development and a darker setting. It’s a must-read for any fan of the saga or adventure in general.

All soft copy books of The Battle Of The Labyrinth PDF acquired through Reading Sanctuary require you to leave a review on the book’s Amazon page to help authors. Thank you!

Buy or Download The Battle of The Labyrinth Book

The Battle of The Labyrinth.pdf

The Battle of The Labyrinth by Rick Riordan