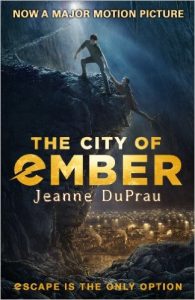 The City of Ember by Jeanne Duprau is the first novel in a series set in a post-apocalyptic, subterranean city called Ember. It had been built to allow its inhabitants to survive for at least 200 years, but now is crumbling and decaying. In the novel, we follow two protagonists, Lina Mayfleet, and Doon Harrow as they attempt to escape the city by following clues left behind by the original builders. The novel was adapted into a film in 2008 directed by Gil Kenan.

The story begins pre-apocalypse as a group of scientists, doctors, and architects known as “The Builders begin to construct the underground city of Ember. Their plan is for the city to last at least 200 years to avoid the populace succumbing to a disastrous event. In addition to building the city, they provide the mayor of the city with a locked box that supposedly contains instructions for the inhabitants. During a mass infection of a deadly cough that spreads among the citizens, one of the Mayor’s attempts to open the box and fails. He dies and is unable to return the box to where it belongs or inform anyone of its importance.

It turns out that the former mayor who passed away is Lina’s grandfather, and he had left the box in their house. Unfortunately, Lina’s baby sister, Poppy, managed to open the box and chewed on the instructions inside. With the help of Doon, the two piece together the instructions. The final result is a set of instruction on how to escape from the city of Ember. As the city decays, its citizens worry about the power going out and the dwindling food stores.

Soon after this, Lina and Doon find out that the current mayor and his clerk have been stealing and hoarding rations. When they try to bring the theft of rations to light, the mayor tried to have them arrested. Lina and Doon need to decide quickly what to do with the instructions they’ve discovered on escaping Ember. In the end, they attempt to escape Ember and head out into the darkness that surrounds the city, bringing along Lina’s baby sister.

They travel by river on a boat, and along the way they discover a journal written by one of the original residents of Ember. This journal warns the reader of impending doom and notes that the city is only meant to be a last resort. The journal ends abruptly, leaving a lot of questions that Lina and Doon have unanswered.

They do manage to escape the darkness, and upon emerging to the surface, they realize for the first time that their city is underground. Surrounding them are trees and a sunrise, things they’ve never seen before – they are stunned by the beauty of the world. Realising they need to help their friends and family escape, they tie instructions to a stone and throw them into the crevice from which they’ve just escaped.

The story The City of Ember is similar to Suzanne Martel’s The City Under Ground and is a fascinating look at the citizens of the city being left in the dark about the state and existence of the world above. This fantasy dystopian novel incorporates mystery, action and adventure with an almost torturous cliffhanger at the end – unless you already have the next novel, The People of Sparks, in hand.

The download is available via purchase from Amazon for The City of Ember by Jeanne DuPrau. [PDF], Epub and Audiobooks versions of this creation are available from Amazon.

All soft copy books of The City Of Ember by Jeanne DuPrau Book PDF acquired through Reading Sanctuary require you to leave a review on the book’s Amazon page to help authors. Thank you!

The City Of Ember by Jeanne DuPrau Book PDF.pdf

The City of Ember: A Novel