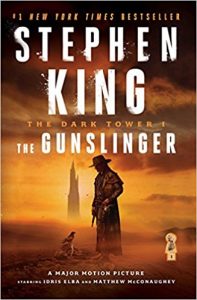 The phrase Welcome to the Wild West, couldn’t be made any truer in relation to this book. Everyone is familiar with the standard Western plot of the righteous Sheriff versus the sleazy villain. Characters seemingly embodying, the essence of good and evil in a clash of wills, accompanied by epic horseback chases and midday showdowns. This tale takes a much different approach to the portrayal of western stories that we have grown accustomed. The Gunslinger offers the reader a western story embedded with the raw powers of the supernatural. A villain armed the powers of necromancy, and a hero who walks the thin line between good and evil. It is not your typical western adventure, but those adventures aren’t nearly as thrilling.

As the book begins, the tale is depicted to take place with a setting that is similar to that of a classic Western movie. Despite this world’s resemblance to ours, one of the major differences lies in its apparent unique flow of time.

Roland Deschain is on a quest to find a mysterious Dark Tower. This tower, he believes holds the answers to the meaning of life and death within it. This is not his only quest however, Roland also chases after the villain of the tale. This villain is simply referred to as the Man In Black. Roland has spent a long time chasing after the MIB, but he has always managed to elude our hero.

Roland, is also known as the Gunslinger. On his journey, he encounters the home of a farmer by the name of Brown. The Gunslinger chose to rest here for a while and conversates with the farmer. Roland soon begins to speak about his adventures before his arrival at Brown’s home. He begins by stating that he had ventured to Tull, a nearby town, where he met a bartender. Allie was her name and she and Roland had soon became lovers. Unfortunately, their love was abruptly interrupted as one of Allie’s other lovers tries to murder Roland. Following the complications of that event, Allie informed Roland that the MIB had been in Tull. She also went on to state that while there he also resurrected a man from the dead.

This is unfortunately not the end of the MIB’s exploits within the town. Roland soon became aware that the town preacher Sylvia has had an affair with the MIB. She also informed him that she was now pregnant because of it. Upon hearing this Roland chooses to carry out his own method of abortion on Sylvia. This expectedly didn’t go over well with her and she announces that Roland has killed the child of the Crimson King. Sylvia continues to then persuade the town’s people into being against Roland. Due to being vastly outnumbered, the Gunslinger is forced to live up to his nickname and executes the town’s people. This even includes his beloved Allie, as he saw this as his only option to escape.

Roland ends his story with Brown and awhile after, makes the unfortunate discovery that his stead has died. Now forced to continue the journey on foot, Roland encounters a boy by the name, Jake Chambers. Jake apparently has been murdered within his own universe but manifested within Roland’s world. Roland becomes aware the Jake doesn’t remember much from what happened and uses hypnosis to gain access to his memories. He uncovers that Jake was the son of a T.V executive and that he was killed in his own world from being crushed by a car. After this Roland continues his journey with Jake where he realizes he’s developing an attachment to the child.

After becoming conscious of these growing feelings, Roland realized that he is becoming more and more vulnerable. Also stemming from this fact he remembers the time spent learning under a man by the name of Cort. As Roland continues to reminisce, he also recollects his father’s death and the man who he later found sleeping with his mother. He remembers the anger and frustration felt at that age, brimming with the desire to avenge his father. Before he could attain such vengeance, however, he needed to officially attain his manhood. To do this Roland needed to defeat Cort and although he was only 14, he managed to accomplish this feat by the help of a trained bird.

Continuing the story, Roland has a very risqué encounter with an Oracle spirit from which he learns the whereabouts of the Man in Black. He learns that he will encounter the MIB soon but if he continues his journey to the Dark Tower, Jake will not survive! Despite this warning, Roland continues with Jake on his quest, traveling days on train tracks, through a winding mountain, by the use of a handcar. Sometime after this, the duo manage to make it through a dangerous encounter with some monsters. Where, finally the Man In Black makes an appearance and the duo comes face to face with their pending fates.

All soft copy books of The Dark Tower The Gunslinger Book PDF acquired through Reading Sanctuary require you to leave a review on the book’s Amazon page to help authors. Thank you!

Buy or Download PDF of The Dark Tower The Gunslinger Novel

A Wrinkle In Time
Advertisements