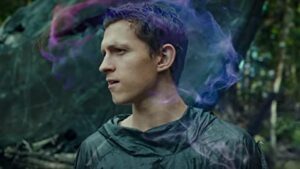 A new film gaining traction for its release in America on March 5th, 2021, is Chaos Walking. Directed by Doug Liman, this promising action-adventure film is based upon the sci-fi trilogy Chaos Walking. Drawing most of its adaption material from the first installment in the series The Knife of Never Letting Go (2008) by Patrick Ness. The film’s release was delayed from 2019 to allow for a better final product for the eager fanbase. This year, starring Daisy Ridley as Viola Eade, Tom Holland as Todd Hewitt, and Mads Mikkelsen as Mayor Prentiss, Chaos Walking promises to give its long waiting fans a grand show.

The story centers around the life of Todd Hewitt, whose 13th birthday is near at hand. Todd lives in Prentisstown with his dog, named Manchee. Prentisstown? It’s a small settlement on a planet recently colonized by humanity dubbed the New World. Another unique element to Prentisstown is the fact that their no women there. Todd lives under the roof of his foster parents Ben and Cillian. He was in their care since his parents died in the great war between humanity and aliens called Spackle. As if things were not odd enough, there’s also a germ called Noise in this settlement. The germ causes those infected to have their thoughts broadcasted so loud that everyone near you can hear them. Think of it as having a megaphone speaker connected to your brain.

In Prentisstown Todd, is the only boy remaining in the settlement. Due to the rule that a boy is regarded as a man after he turns thirteen years old. As many of us know, the youngest one always gets the lamest jobs. In Todds’ case, he is stuck picking apples for the settlement. Todd is living the life of a typical boy in Prentisstown until a fateful day arrives. When Todd and Manchee, taking a stroll to the swamp nearby the find, he realizes a spot of silence. The first being he encountered that broadcasted no thoughts. Though already baffled, Aaron, a preacher from church, suddenly attacks Todd. Todd escapes the preacher and runs home in search of answers.

When Ben and Cillian learn about the events from Todd’s Noise, they immediately show dread. They then pack a bag of supplies for Todd, explaining that they knew this day would come. Todd is banished from Prentisstown and must leave at once. Ben gives Todd a map and a journal take with him. Knowing that others will hear Todd’s Noise, Ben doesn’t give any further information and sends him along. While running from his former hometown, Todd, detects the hole in Noise once more. However, this time he sees the source. The source is from a being he never encountered before a girl. Prentisstown only contains men. So, you can understand Todd’s new confusion about meeting a girl. The mysterious girl’s name is Viola. She arrived in New World on a spaceship that departed from the Old World. Unfortunately, her ship crash-landed and, she was the sole survivor. Not only is Viola a girl but, she also doesn’t have Noise. This situation is all-new for Todd. However, he has no time to rationalize what is going on. Aaron, freshly surviving a crocodile attack, is chasing Viola. The duo narrowly escapes the preacher and travels far away from Prentisstown, following the map to another settlement, Farbranch.

At Farbranch, Todd realizes the stories he knew about the fate of humanity were false. Not only is there another settlement, but also women. Farbranch is a mixed-gender settlement, and Todd learns that their people shun Prentisstown. Though desperate for answers, Todd can’t receive any. Suddenly, the Prentisstown army sieges Farbranch, led by Mayor Prentiss himself. Todd and Viola flee Farbranch amid the chaos. Todd and Viola begin traveling to another settlement, Haven. As the duo travel passing through other settlements of people, Todd learns that truth. People shun Prentisstown men because they initiated the war with the Spackle and killed all their women with their own hands. Shaken by the reality, he had never known Todd must brave the World with Viola and Manchee as his allies. But can they survive the wrath of Major Prentiss alone?

“Without a filter, a man is just chaos walking.”
― Patrick Ness, The Knife of Never Letting Go, Chaos Walking

“War is like a monster,” he says, almost to himself. “War is the devil. It starts and it consumes and it grows and grows and grows.” He’s looking at me now. “And otherwise normal men become monsters, too.”
― Patrick Ness, The Knife of Never Letting Go, Chaos Walking

“Knowledge is dangerous and men lie and the world changes, whether I want it to or not.”
― Patrick Ness, The Knife of Never Letting Go, Chaos Walking

Download Chaos Walking Book 1 – The Knife of Never Letting Go from below or purchase a copy from Amazon.

All soft copy books of The Knife of Never Letting Go acquired through Reading Sanctuary require you to leave a review on the book’s Amazon page to help authors. Thank you!

Buy or Download The Knife of Never Letting Go Book

The Knife of Never Letting Go.pdf 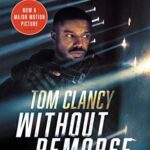